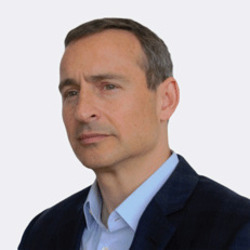 Give us a brief overview of the path that led to your current role.

After earning an MBA in Finance and Decision Processes from the Wharton School, I worked for several years on Broadway in commercial theater before joining the media and entertainment advisory group of a boutique investment bank. I left banking in 2004 to join Marvel Studios to assist in the company’s transformation from a licensor of film rights to the major studios into a producer, financier and owner of the films based on its iconic comic characters, beginning with Iron Man.

In 2007, I helped create a new film studio, Summit Entertainment, which I joined as CFO. In 2012, having led the sale of Summit to Lionsgate, I started Latus Advisors, a specialty media advisory practice through which I served as part-time, acting or consulting CFO to Exclusive Media, Macro Media, Madison Wells Media and Virgin Produced, among other companies. In 2016, I was engaged as a consultant by Dalian Wanda to advise on Legendary’s strategy and business plan, and I joined Legendary full-time as CFO in May 2017.

What is one of your guiding leadership principles?

As a leader, your most valuable currencies are integrity and humility. This is particularly true in finance. Both internally and externally, a finance leader’s highest value is to be an impartial adviser to the CEO and business leads, leveraging data and analysis to incrementally improve the company’s leadership’s decision-making. At the same time, numbers can be subject to interpretation and are not the only relevant inputs. Being the trusted and accessible source of the finance perspective can maximize a finance leader’s impact on an organization.

With disruption being a key theme of the past year, where do you see your role as CFO going in the next 1-2 years?

Over the near term, the CFO’s role in my industry and in my company is moving more toward analysis and interpretation of conflicting and confusing data. The CFO will continue becoming a more valued strategic adviser to the CEO and business unit heads as the model of unitary leadership often breaks down in times of crisis. It is critically important that company leadership act together as high-performing teams, maximizing the use of data and analysis and considering major decisions from multiple points of view.

What advice would you give to someone just starting out in the CFO role?

No one gets it right all the time, so expect to make mistakes, but be quick to realize and acknowledge them. If you think of your tenure as CFO as a journey on which you’ll continue to learn and get better and get it “more right” as you go, you’ll have more fun and less stress.

Tell us 3 fun facts about yourself.

What is the value of participating in a professional community through Evanta?

Professional networking has had a huge impact upon my career. Nearly every job I have taken since 1997 I have found through networking. In addition, no CFO knows everything there is to know about the job, especially earlier in one’s career. I am grateful to the assistance, guidance and introductions my colleagues have provided me over the years. Finally, I have learned during this time of pandemic that one of the parts of the job that I most enjoy (but have been largely unable to do over the last year) is business-related socializing. Professional communities provide ready-made opportunities to meet and socialize with like-minded colleagues.

by CFOs, for CFOs

Join the conversation with peers in your local CFO community.